A few weeks ago, Mike Masnick and I ran a 4-hour workshop to explore positive futures involving transformational artificial intelligence. Afterwards, I wrote two Twitter threads covering the game contents and a behind the scenes of the facilitation patterns we used. Here’s a slightly edited version of those threads.

On December 17th, Mike Masnick and I had the pleasure of running a 4-hour workshop on Positive AI Economic Futures for the World Economic Forum and Berkeley’s Center for Human-compatible AI We’re thrilled with how it went – here’s an overview with details on the goals, exercises, and output.

The event was part of a broader Positive AI + Economy initiative that will include reports, scenarios, and an X Prize film competition that will build on the workshop’s outputs.

We had ~90 attendees, including top economists, technologists, and sci-fi authors – they were awesome and brought a ton of creativity, energy, and expertise!

We ran 5 highly interactive and collaborative exercises to envision the world after transformational AI remade society. Each exercise was done in breakout groups of 4-6 participants. Here’s a quick dive into each one:

Exercise 1 focused on what will be newly abundant in the futures and what scarcities and consequences might ensue.

Here’s an example of one of the group submissions: 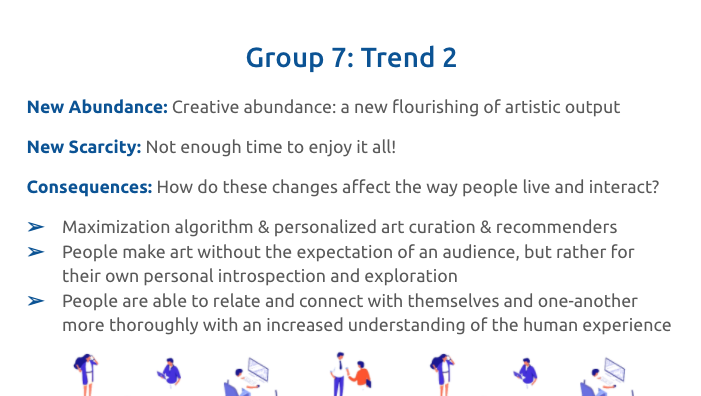 Exercise 2 had participants creating Metrics Dashboards to guide humanity and then discussing the tradeoffs and unexpected consequences of their chosen metrics. The groups had some great debates and critiques. 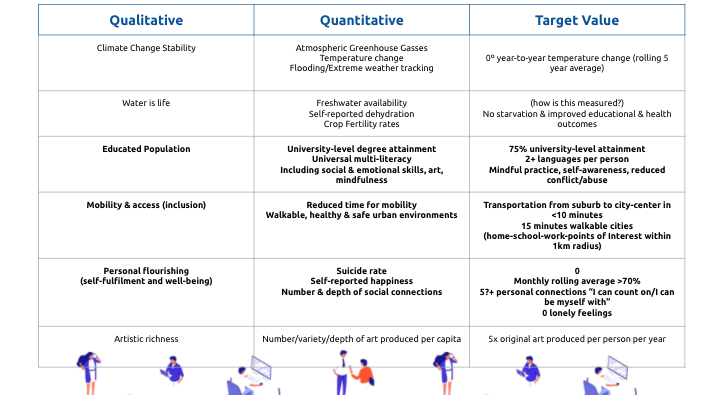 Exercise 3 had each group pick a final hurdle (economic, power / political, meaningfulness) for humanity to overcome. The groups then told the story of overcoming those hurdles through a series of news headlines.

The group stories ranged from serious to zany but all were great: 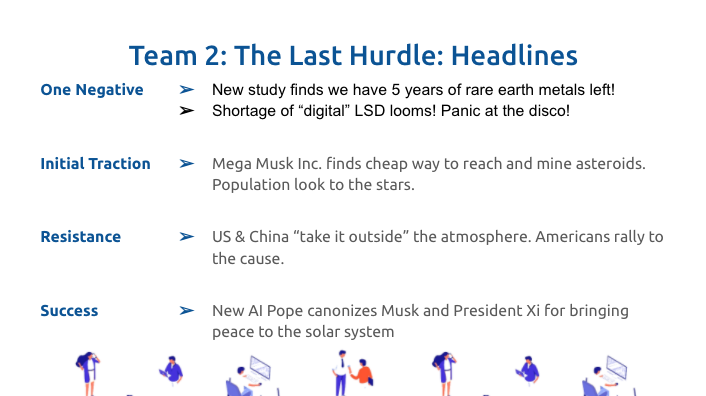 Exercise 4 focused on the new essential institutions, participatory organizations, and social moments that might play a critical role in the future. We had groups do this both before and after a major earthquake. 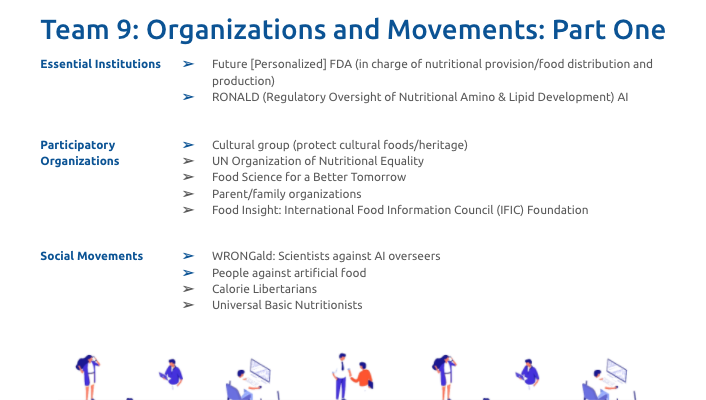 Exercise 5, designed by Ruth Hickin, zoomed in to the individual level. Participants adopted future personas and held in-character discussions about difficult questions about their obligations to society and finding meaning in a post-work world.

We’re thrilled with how the event turned out and we’ll be sharing the output in the future. Also, keep an eye out for the reports and X-Prize competition next year.

Deep thanks to Caroline_Jeanmaire and Conor Sanchez for bringing us in and being great collaborators on the workshop design! Also thanks to the dozen facilitators who helped each group stay on track and create great visions of the future.

You can check out Mike’s thread for more details and highlights of the experience:

With 5 collaborative exercises and ~90 participants, this was one of our most ambitious workshops / activities so far. We’re thrilled with how it went and are excited to keep exploring the future through storytelling and worldbuilding games!

Yesterday I wrote about running an interactive ~90 person workshop on positive AI economic futures. Today I want to share some of the experience design patterns that Mike and I used to ensure that it was smooth and successful.

We were able to employ a bunch of techniques that we’ve been exploring over the past few years and hopefully you’ll find them interesting, especially if you want to run interactive events. This event was on Zoom but many of these patterns apply on any platform, or even offline.

I’ll start by talking about the overall event design and then shift to cover how we scaffolded and supported the exercises. The event was four hours, had ~90 participants, five exercises, and 5 speeches scattered throughout. A lot of moving parts!

Ahead of time, we created a detailed Run of Show doc that included down-to-the-minute timing and info related to different responsibilities. We also created a few specific roles to make sure things didn’t fall through the cracks.

The event was on Zoom so we had one person was responsible for managing breakout groups and making sure folks were in the right place (more on that in a bit).

We also had someone responsible for keeping track of the time and sending out broadcast messages to participants – letting them know what step they should be on and how much time they had left.

Beyond the core team, we had over a dozen volunteers who were informal facilitators in the breakout rooms. We briefed them on the exercises in advance and answered any questions. Their main role was to model good behavior and keep their group on track.

These facilitators did a great job of ensuring that the exercises went smoothly for each group. They were also able to backchannel questions to us (via Slack) for quick resolution. It was a relief to us knowing that we had them embedded in each group.

Our breakout room manager was able to pre-assign the group facilitators to each of 14 breakout rooms. When it was time to start the exercise, they randomly assigned the rest of the participants to those rooms and they were off to the races.

For one exercise, we had each group do an activity on their own and then we paired groups up for critique. The breakout manager was able to quickly drag folks from one room into another and it all went smoothly. This was a cool interaction pattern and provoked great discussions.

The groups themselves were 4-6 participants. We’ve found that to be optimal for group collaboration and co-creation – any more is unwieldy and any less is fragile to folks dropping out or being shy.

Halfway through the event we reshuffled the breakout groups. This brought an infusion of new ideas and energy; plus, it enabled participants to meet more people throughout the day.

Reshuffling groups also made the event more friendly to having participants drop in and out throughout the day. Groups were rebalanced and latecomers didn’t have to get up to speed on the two hours of previous work.

To make the event resilient to delays, we built in “crumple zones” – parts of the schedule that we could shrink or skip if we were running late. Ex: we could easily trim down or remove post-exercise recaps where we shared different teams outputs.

We also scheduled a break in the middle that could be 10-20min depending on how much time we needed back. The first exercise started 10 minutes late but we were able to catch back up to schedule by the mid-way point. We even ended the event 10 minutes early!

The break was also crucial given that the event was 4-hours long – we wanted to give folks some time off-camera to stretch, grab a snack, etc. We immediately followed the break with two short talks; folks wouldn’t miss any exercises if they were running late or still eating.

The workshop consisted of five exercises that explored possible, positive futures focused on AI and economics. The exercises started high level and abstract, and then each exercise zoomed in: Humanity -> Institutions -> Individual POV

This format helped ease folks into collaborating and worldbuilding. Each exercise was able to build on the context created earlier in the day.

All of the collaboration happened in Google Slides. We gave each breakout group a link to their own slide deck which contained instructions, examples, inspiration, and templates for them to fill out.

Google Slides was a great fit as it allowed multiple participants to edit at once (great for wordsmithing). As facilitators, we could see each groups progress in realtime and decide when to bring the groups back to the main room.

Even better, having the output in Slides allowed us to copy finished templates from the group decks to our main deck. We then shared different groups’ creations after each exercise.

Another benefit to having groups work in Slides is that we could easily capture their outputs for the team to analyze later. That’s critical for this initiative as the exercises will go on to inform reports and be used as inspiration for a film competition.

Before each exercise, we walked everyone through the instructions and an example. We included all of that in the group slide decks for easy reference when the groups were in their breakout rooms.

We also included slides with extra inspirations and advice for the exercises. We like giving participants the seeds of ideas to steer them in the right direction. They’ll almost always go well beyond those inspirations and create something interesting and novel.

This ended up being a long thread but I hope you’ve enjoyed reading about some of the design patterns we used to make the event run smoothly and to support the collaboration we wanted to see.

Hopefully we’ll be designing, running, and sharing plenty more events like this – reach out if you’re interested!