Over the past few years, I’ve spent considerable time exploring two interests: board games and storytelling. It seems inevitable that I would find my way to traditional pen-and-paper roleplaying games (RPGs) in the mold of Dungeons and Dragons (D&D).

The defining aspects of the genre are:

For me, the biggest allure of RPGs is the sheer open-endedness of game play. Players can try anything they think of to accomplish their goal and creativity can be rewarded with epic and satisfying results. No other genre enables such flexible problem solving.

Since D&D emerged in the early 1970’s, the RPG genre has expanded into a plethora of game systems, offering an immense diversity of experiences. One major difference between systems (rulesets) is the complexity of the rules and the degree to which they attempt to simulate reality. This is usually contrasted with the degree to which the game is narrative in nature - where actions are resolved through storytelling rather than calculation.

D&D and some wargames lie near the simulation end of the spectrum - a player may roll multiple dice based on the type of action and their environment, and then modify the results of the dice based on other factors before arriving at a number that indicates if the action was successful; then the player might roll extra dice to see the degree of the action success. Systems like Blackbird lie toward the other end - players describe what they’re doing and, while the GM may occasionally ask for a simple dice roll, the focus is on narrative.

Different systems foster varied play experiences. A simulation heavy game is likely to have most of the (real world) time spent simulating combat; there’s a joke about a group of D&D players taking one hour to simulate five minutes of combat and then one minute to cover five hours of travelling. Narrative games usually have players spend more time exploring the world, talking with its inhabitants, and time might flow much more quickly; an entire fight might be resolved in just one dice roll.

I never played RPGs as a kid - I grew up on computer games and I don’t think any of my friends were into pen-and-paper games. I may have missed out on something great; some of my friends reminisce of regular RPG sessions with their friends in which their characters undertook epic adventures over years of (real world) time.

My first experience with an RPG was via Game Studies Book Club (GSBC) - a group that holds monthly discussions of games, mechanics, and rules (spanning video games, board games, and RPGs). One of the members GMed a game of Exalted for us; Exalted is an over-the-top, anime influenced, “pulp fantasy” game and it lies toward the simulation end of the spectrum, though it’s more narrative oriented than D&D.

We played for over half a day, completing an one-off adventure. It was a fun, though exhausting experience; the group loved the narrative elements but grew weary of the intricate combat. Toward the end, when the group was facing a large battle, I remember suggesting ‘Let’s just roll all of the dice at once and the GM can tell us what happened!’ - we did that (sparing an hour of combat) and it was still a satisfying conclusion.

My next foray into RPGs was via Blackbird. Blackbird is a free, extremely streamlined narrative RPG. The original game was set in a steampunk / fantasy / space universe and released under the name Lady Blackbird. The rules fit on to one page and the adventure (for GM eyes only, fits on a few additional sheets; this contrasts with D&D rules that run for hundreds of pages. I didn’t play Lady Blackbird but Operation Blackbird, an espionage themed variant in which we played super-spy archetypes (James Bond, Jason Bourne, etc).

My old roommate hosted two different adventures using Operation Blackbird and they were a blast. They unfolded over just a few hours, the pace was fast and we players had tons of freedom for how we engaged with the world. I found the freedom and emphasis on narrative much more satisfying than the Exalted system.

Recently, the same roommate created his own Blackbird variant, set in the Caribbean during the golden age of piracy. Rather than gather around a table, as we had done in past sessions, we played online via Roll20.net and then Google Hangouts. Roll20 aims to bring the tabletop experience online and there is a large suite of tools for the GM to control what information is available for the players and large canvas to show maps, characters, etc. Aside from a few technical difficulties, the adventure was as fun as playing in person and we were able to include friends from across the country.

After great experiences with Blackbird, I’ve become interested in exploring RPGs more thoroughly and experimenting with different systems. A few weeks ago, I was killing time in Berkeley by perusing their excellent game store. I was initially drawn to their board game section but soon drifted over to the RPGs; they have several aisles full of different systems and adventures. As I explored, I noticed that many game systems were publishing beginner boxes.

Beginner boxes (also: starter sets) are all-in-one introductions to a game, targeted at uninitiated players and first time GMs. They have consolidated or simplified rules, dice, and an introductory adventure. The cost is $10-$30, compared to the $50-$150 investment of getting started with many of the popular systems. 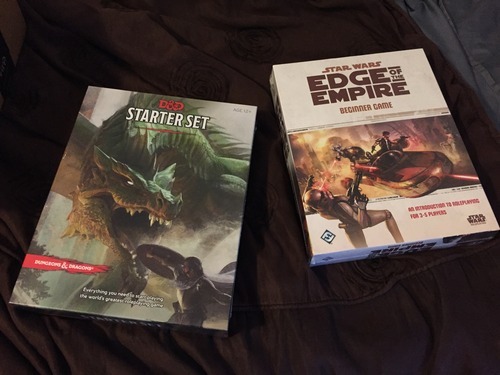 After doing some research I bought the intro sets for both Dungeons & Dragons 5th Edition and Star Wars: Edge of the Empire. I chose D&D because it’s the biggest name in RPGs, the 5th edition is supposed to be significantly streamlined from earlier versions, and it was only $10. I bought Star Wars because I like the theme and the mechanics are very smooth and narrative focused. After some consideration, I choose the Star Wars game for my first foray into GMing.

The Star Wars beginner box is close to perfect. It includes beautiful maps, character tokens for players and enemies, glossy folios with pre-made characters for each player, and dice. There’s a rulebook and introductory adventure - the adventure is brilliantly crafted as throws the players right into the fray and gradually introduces them to the game’s mechanics. The player sheets are also well designed and double as a cheat sheet for the game rules.

After studying the materials and asking some friends for GMing advice, I gathered a small group to play this past Sunday. After just a little bit of explanation, we jumped right into the adventure. Edge of the Empire focuses on the seedier side of Star Wars (Bounty Hunters, Smugglers, etc) and our adventure opened in a small town on Tatooine. I gradually introduced the rules over several encounters (mini-episodes); the players came with no preparation or knowledge of the game - two of them had never played an RPG - yet they took to the system with ease.

I was a little nervous about GMing for the first time but I thoroughly enjoyed myself. It was a lot of fun reacting to the clever ideas that the players generated to overcome obstacles. The Star Wars system is mostly streamlined and combat encounters tended to last less than ten minutes; they were interesting without being tedious. The dice rolls involved little math; the dice contain symbols that affect both the outcome of the action and other aspects of the story - they provided just enough structure to guide my improvisation.

Two scenes stand out as particularly epic / cinematic. The players were heading crosstown when they were discovered by two sets of stormtroopers. With an superb dice roll, the players shot at the town’s water tower, causing it to collapse; the ensuing surge of water knocked over the enemies, allowing the heroes to escape. The players continued to use this incident to their advantage when they persuaded some guards that they were needed to help clean up the mess.

My second favorite moment was when the players stormed the ship containing the adventure’s boss. Rather than defeat the boss and then steal this ship, two players attacked the boss while a third prepared the ship for take-off. By the time the heroes knocked the enemy unconscious, the ship was high above the city - they threw him out the ramp and he plummeted back to Tatooine.

I had a lot of fun playing GM and the players seemed to enjoy themselves. The game only took a few hours - the perfect amount of time. We might do a followup adventure in the new year, perhaps even a campaign over several sessions.

Playing RPGs has been a great excuse to have fun with friends. It hits several buckets for me: storytelling, improv, board game strategy, creative problem solving, and spending quality time with people I like. In contrast with (most) board games, I like that RPGs are cooperative (rather than competitive) and have infinitely more leeway for creativity. I’ll probably be playing them a bit more and writing about them here on this blog.