This is the fourth post in my series on the future of work and labor. Here are the earlier posts:

Technology is driving transaction costs closer to zero; in earlier posts we looked at the optimal firm structures in different cost environments. 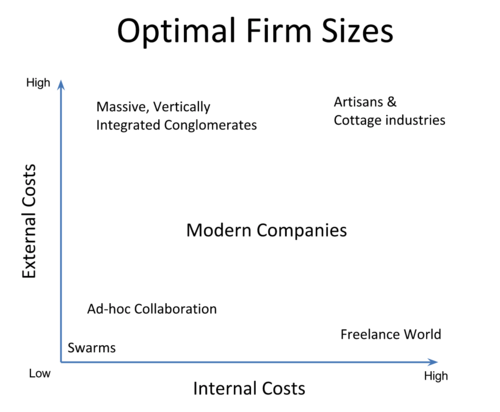 Today, we’re moving from the center of the chart to the lower-left corner, where both internal and external costs are low. Minimal external costs make it easy to outsource while limited internal costs enable team size to scale smoothly.

We’ve entered an era of incredibly productive small teams. This trend is driven by cheap and reliable outsourcing and low production costs. Instagram had only 13 employees when it sold for one billion dollars; WhatsApp had 55 employees and sold for $19 billion. Both of those companies were able to scale their products with the help of free open source software. Many companies started by outsourcing their technology development (e.g. Klout, Fab, and Skype). There are pitfalls to outsourcing development, especially if tech is part of the competitive advantage; however, outsourcing can allow a small team to move quickly if the technology is trivial.

As costs decrease, we’ll see smaller teams tackling larger projects. They will be able to stay small until they have found product / market fit and are ready to scale; some teams will opt to stay small and scale by outsourcing. This gives teams more flexibility as they don’t have to take outside funding and thus can sell their company at earlier stages or choose not to scale, based on personal preferences.

The low transaction costs allow teams to form, scale, and disperse with ease. If development costs are low, a few people can join together to quickly create and launch a project. The output can range from open source libraries to podcasts to events. Because the financial costs can be zero, there might not be a formal legal entity for the team; because transaction costs are low, new members may join and leave as their skills are needed. If there is financial upside or potential liability, it might make sense to incorporate but I’ll return to this need in a later post.

This trend is complementary to the second post on new market opportunities. Droves of teams will enter long-tail markets, forming and decaying as ideas are validated and products are launched. Individuals will flit from one team to the next, helping where they can and sharing in some of the revenue or glory.

Swarms are a structure for when an ad-hoc team meets a huge opportunity - swarms are radically decentralized and highly scalable organizations. They can involve thousands or millions collaborating in a loosely connected and mostly bottom-up manner. Swarms are different from other forms of organization in that individuals can freely join or leave and decision making is pushed to lowest level that is feasible; unlike some mass-movements, there is a clearly defined hierarchy and a leadership with a strong vision.

Rick Falkvinge coined the term ‘swarms’ in describing how he built the Swedish Pirate Party and scaled it internationally to the extent that it has won two seats in European Parliament and numerous offices in more local elections. He designed the Pirate Party organization to be open, transparent, and radically decentralized; yet he kept it focused and structured so it can be productive. This balancing act was maintained through thoughtful use of software, norms, and organizational structures; the Pirate Party achieved success where chaotic movements like Occupy Wall Street failed to reach their goals. I highly recommend checking out his memoir / how-to guide: Swarmwise[http://falkvinge.net/files/2013/04/Swarmwise-2013-by-Rick-Falkvinge-v1.1-2013Sep01.pdf].

Swarms are still a nascent way to organize. As more form, we’ll gain a better understanding of what norms and structures help them perform better. New tools will emerge to facilitate swarm development and productivity. Ultimately, Swarms will enter the private sector and participants will be able to profit off their contributions. I’ll return to this new form of collaboration in future posts.

In a previous blog post [http://blog.randylubin.com/post/101950195063/competitive-advantage-of-cooperatives-and-daos], I covered two alternate forms of organization: worker owned cooperatives (co-ops) and distributed autonomous organizations (DAOs). Both of these forms will have roles in the future of labor.

Worker owned co-ops are effective in stable competitive contexts and might be an ideal organizational form for some of the long-tail opportunities. Workers may flock to them as the shared ownership might provide protection from the downsides of commoditized labor discussed in the previous post.

Distributed Autonomous Organizations are algorithm driven entities that might have efficiency and transparency advantages over traditional firms. They might help drive costs lower and could power swarm-style organizations.

For more in depth discussion of co-ops and DAOs, read my other blog post.

While lower costs and better tools are major enablers of new organizations, norms and processes are also going to play a large role. Social technologies - new processes around team structures, decision making, and revenue sharing - are evolving alongside the other types of technology. We’re still in the early days of social technology but there are many ongoing experiments; here are some recent ones:

Bettermeans was a platform that facilitated completely flat team structure. At its core was a product management tool that tracked tasks and decisions. The software had built in processes for making decisions, dividing responsibility, and sharing the credit. I recommend checking out this video on it.

Holocracy is a set of management practices and processes that enable better bottom-up decision making. Several companies are experimenting with it in whole or in part, including Zappos and Medium. The idea is that teams using holocracy will move faster and make better decisions.

Assembly is a platform that allows collaborators to contribute to different startup ideas and products in exchange for ownership. It all happens in a fluid and decentralized manner and contributions range from engineering to marketing to product management. It’s a more decentralized and participant driven version of Quirky, currently focused on software and apps. There are many ongoing projects but Coderwall is the most successful to date.

As costs decrease and productivity increases, new forms of organization become possible. These exotic new forms of organizing will occupy different niches in the emerging ecology of work and labor; specialized team structures will excel at some tasks and fail at others. We’re at the beginning of this trend and optimal structures will only emerge after lots of experimentation.