This week I was able to put in a few more hours after work on the game I’ve been talking about.

Early in the week, I built it to a point where it:

Here’s a shot of the map a few turns in; the numbers are the population in that territory: 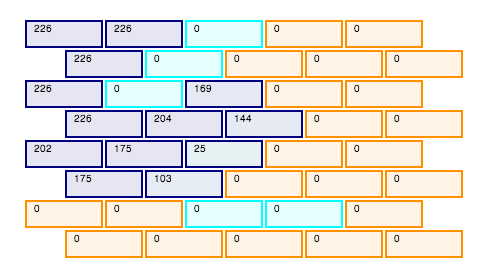 Later in the week I did a major refactoring of the code to take advantage of RequireJS. This allows me to break the Backbone App into many files in different folders. It was a bit of a headache to port it over but my codebase is now much easier to manage.

With some of the guts of the simulation behind me, I’m starting to create the game part of the app. I’m going to start by creating a simple game that just involves civilizations at the Band level (groups of 20 kinsmen). Once that’s complete, I’ll share it here so you can play it.