Last week I was randomly selected to email 20,000 strangers through The Listserve. As I described here, I decided to run Milgram’s Small World experiment. Recipients were instructed to forward the email to a friend who might know me and to keep forwarding the message via friends until it reaches me.

The email went out on Monday morning and the responses started almost immediately. The majority of replies came in the first 48 hours but I continued to receive them throughout the week.

As of now, I have received 60 completed chains involving over 100 participants. This doesn’t include duplicates, cheats, and side conversations that have spawned from the initial email.

Here is the distribution of successfully completed chains: 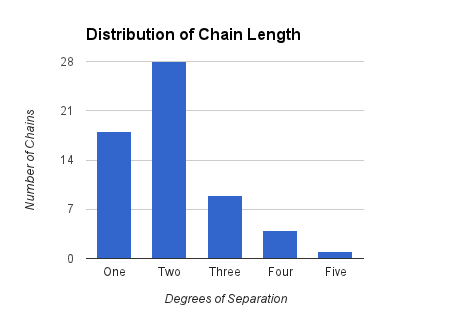 Most successful chains were short; 18 chains consisted of one link (The Listserve recipient already knew me) and 28 chains had two links. The longest chain took five jumps to reach me.

There were only six people who were part of two chains and no one participated in more than two chains.

There were no clear trends in terms of chain origin but there are were several clear patterns regarding the last link in the chain (closest to me). 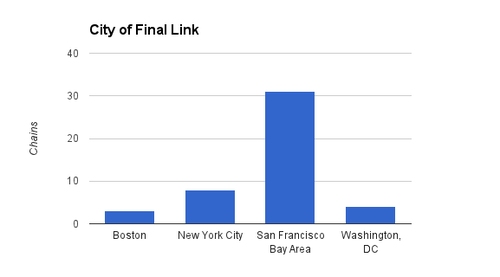 Most successful chains made their final hop from within the San Francisco Bay Area (31); New York City (8), Washington D.C. (4), and Boston (3) trailed behind.

The chain travelling the furthest distance started with two links in Florida before reaching one of my friends in Singapore. The round trip from SF -> Florida -> Singapore -> SF is over 21,000 miles. 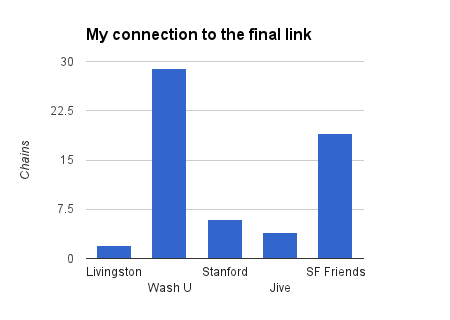 People from all parts of my life served as the final link in a chain but the two largest groups were friends from Washington University in St. Louis (where I studied undergrad) and friends I’ve made since moving to San Francisco. Minor sources included Stanford (grad school), Jive (my employer), and Livingston (my home town).

Before delving into any commentary / analysis, I want to make a clear disclaimer. Due to the nature of the experiment, it is very difficult to reach statistically significant conclusions. Problems include:

With that out of the way, I will now speculate wildly…

Chain Length / An Even Smaller World

The internet is making a small world even smaller. The chain lengths of my responses are much shorter than in Milgram’s where they averaged between five or six links. My guess is that this is partially due to the statistical bias mentioned above but in large part due to the Internet changing the shape of people’s networks.

My hunch is that technology such as email and IM combined with social networks sites such as LinkedIn and Facebook lead people to maintain much larger networks than in the past. Instead of having certain ties disappear overtime, technology allows them to degrade to weak ties but not vanish; their life updates may appear in news feeds and they’ll show up in searches and as mutual friends.

I found it interesting that the plurality of links came through friends from undergrad. My guess is that I just know way more people from there relative to my other networks because I was there for four years and it was a medium size school.

I was surprised that there wasn’t one or two friends who served as the final link more often; in the Milgram experiment, one man was a conduit for over half the successful responses. I was expecting to have one friend end up forwarding ten or more chains; in reality, the max was two. I think this is more a factor of my own network shape than anything else. I suspect I have a more diverse network than most people, maintained by a active presence online. If I had a smaller, more homogenous network I bet there’d be a higher chain / friend ratio.

This experiment was a lot of fun. I’m glad I chose something interactive for my Listserve email and I’m pleased with the response from the readership. I hope more readers choose to do fun experiments.