Day three of our trip to Mexico City, following Day 2

We woke up early this morning to beat the rush to Teotihuacan. The ancient city is about an hour north of Mexico City and we arrived by 9am.

The three of us at the Pyramid of the Sun

The ruins of Teotihuacan were ancient even at the time of the Aztecs. Most impressive are the two large Pyramids of the Sun and the Moon. It’s interesting to imagine what it would have been like for pre-columbian peoples to have stumbled upon the massive structures.

A small building near the Temple of the Feathered Serpent

Looking up at the Pyramid of the Sun

View of Teotihuacan from atop the Pyramid of the Moon

After thoroughly exploring the complex and museum we grabbed lunch at La Gruta - a mexican restaurant in a cave near the ruins. The meal was delicious; we ate lamb barbacoa and nopales (cactus). 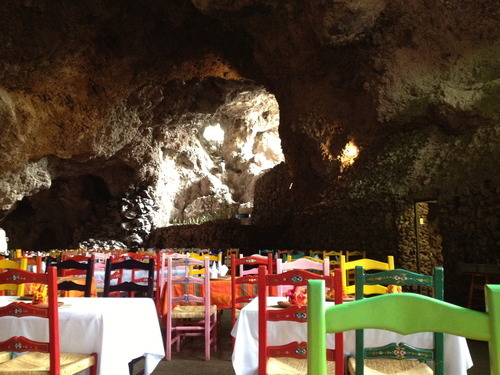 Upon returning to Mexico City, we had a beer tasting at a local bar and found some tasty new brews.

We rounded out the day with dinner at Koi - a Japanse-Mexican fusion restaurant. Like all our other meals this trip, it was great.

Tomorrow morning, we catch an early flight back to SF. This was an excellent trip - we toured amazing museums, ate excellent food, and got a good sense of Mexico City. Travelling with Adam and Sara was a blast and we’re already scheming about future trips!