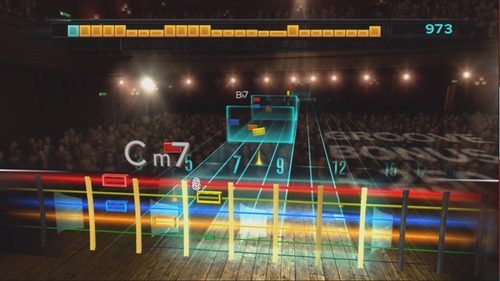 I have seen the future of education in the video game Rocksmith 2014. The game is like Guitar Hero / Rock Band but played with an actual guitar. It’s incredibly fun and effective at increasing guitar skills. Everyone I’ve had play it has been instantly hooked - several friends have bought it immediately from their phones.

The guitar connects via their USB cable and you can use any electric guitar to play. Notes / chords slide down the screen and you pluck / strum your guitar to hit them.

There are three main modes - Learn a Song, Session, and Guitarcade - and supplementary materials including a chord book and many video lessons on guitar techniques.

In Learn a Song mode, you learn and play through a popular song. Like Guitar Hero / Rock Band you start with just a few notes per measure but then build up to the playing every note of the song. The game comes with 50 songs; if you own the original game, you can import 50 additional songs; there is also regularly released DLC. The song selection is pretty good. I was excited by about 50% from the start, another 30% are intersting enough to try and the rest I’ll probably never play.

The game adapts to your skill level on a per-section basis; you might be at full difficulty for the chorus but 37% toughness on the solo. This is great at facilitating flow state as you’re always playing at the optimal combination of skill and difficulty. Even after every measure is at 100% you can still strive for accomplishments such as not missing a note. Once you’ve mastered a song, the note indicators fade away and you can try to play from memory.

Session mode is one of my favorite parts of the game. You can select a backing band, a key, and a scale and then start improvising. The band will adjust it’s energy and tempo to suit your style of play. It’s incredibly fun and I can feel myself improving. I’m looking forward to my next real life jam session and showing off what I’ve learned.

Guitarcade is a collection of minigames focused on specific techniques. They’re modeled on old school arcade games and pretty fun in their own right. For example, Star Chords is a space shooter on rails where your fire at enemies by hitting the correct chords. 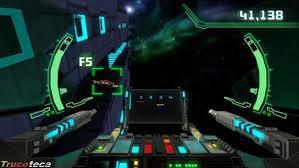 I’ve had the game for a week and I’m loving it. I consider myself an intermediate guitar player and I’m learning a ton. I can see it being more useful for beginners. It probably has less pedagogical value for advanced players but is still a very fun way to learn songs. The only feature missing is the ability to use modern staff notation (sheet music) - I’d like to start learning the actual notes I’m playing in addition to ‘fret 7, string 3’ - otherwise the game is near flawless.

If you’re going to buy the game, you’ll need the USB cable and the software. If you want the 50 extra songs from the original Rocksmith, you need to buy that version as well as a $10 upgrade DLC.