Lately I’ve been musing about laws and norms (socially expected behaviors, contextual to a group). As society becomes more complex, I think we’ll have to rely much more heavily on norms than on laws.

First, a tangent about norms and games (where rules are the laws). When my friends and I play games, our primary goal is always to have fun together, rather than to place first. Though the play can be fiercely competitive, we rarely (if ever) let our zeal to win blind us from the primary goal: fun. This goal of fun is a norm for us - few instruction manuals explicitly call out fun as an objective; in other game environments, the primary goal might not be be fun (e.g. game tournaments, professional games).

Often, the norms are unspoken and follow from the first principle of maximizing fun. Occasionally, norms run contrary to the game rules and we ignore the rules or deliberately create a house rule. House rules are especially useful as they increase the norms’ legibility, thus lowering cognitive overhead for assessing what does and doesn’t violate a norm; they also help anchor player expectations and cohere the group’s culture. Too many house rules (or game rules) can become a burden and detract from the fun.

I’ve been playing several storytelling games lately - notably, Microscope and Once Upon a Time - and norms come up a lot. The emphasis on fun is even more apparent in these games - Microscope doesn’t even have a win condition. I often advise first time players of Once to focus on telling a fun story, rather than burning through their cards to win the game. It’s fascinating to see each group evolve what types of interruptions, contradictions, and leading questions are okay; this always done through norms, not house rules.

This summer I played my first tabletop roleplaying game - via the Game Studies Book Club with which I’m involved. Our group was much more interested in storytelling than in combat, especially when two minutes of in-game combat could last an hour around the table. By the end of the game we’d told our game-runner “we’re just going to role 20 dice right now and you make up how the rest of the battle goes.”

With games, it’s easy to let norms dominate rules. This is likely due to an established culture among the players, clarity around when rules run contrary to norms, and ease of enforcement through social pressure. These are all less clear when translated to larger communities and nations.

In society at large, both norms and laws try to adhere to / enforce a culture’s ethics. I’ll use norms and ethics somewhat interchangeably, though I know they don’t map perfectly. It’s interesting to see what happens when ethics / norms and laws are at ends. Here are four scenarios 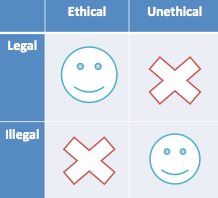 The world and the legal environment are already incredibly complex. The domains of categories two and four are already immense. Number four is especially salient here in silicon valley, where tax law and immigration law often lead to catch-22s.

Technological growth already outpaces legislation. The gap will continue to grow as innovation accelerates and Congress remains in gridlock. When combined with the anonymity available online, it becomes very easy to engage in legal (not illegal) yet unethical behavior. As legislators race to keep up, they’re likely to leave loopholes (due to the complexity) or accidentally ban ethical behavior; there’s also the risk of placing too much regulation on innovation, thus driving it underground or to other jurisdictions.

An over-reliance on laws might boost unethical behavior. When people have to limit legal but ethical behavior, they may feel entitled to engage in legal but unethical behavior (Humans are great at rationalizing… “But the law says it’s okay!”). Further, when the ethics of a decision aren’t immediately apparent - it’s much easier to say “let’s follow the law” than to spend time reasoning through the ethics.

Depending on the context, norms can be a great alternative to laws. They are much more flexible than laws, adaptive to changing technological and cultural landscape. However, they are hindered when:

In a norms driven environment, reputation is crucial. Threat of reputation loss becomes a strong incentive not to violate norms. High reputation signals can attract and secure large customer bases in areas where unethical behavior is legal.

There will always be some inherent contradictions here. Privacy is key to avoiding the dangers of illegal yet ethical behavior. However, anonymity can also allow unethical yet legal behavior to thrive - there is no reputation to be lost. I think we’ll continue to see pseudonyms become increasingly important online as a way to reconcile the two faces of anonymity. However, as we’ve seen through the Snowden leaks, it’s incredibly difficult to truly dissociate a pseudonym from a real identity.

Since technological innovation isn’t slowing down - I think we’ll have to rely more on norms. It’s going to take a serious refactoring of our legal infrastructure, enforcement organizations, and even current norms to make the transition.

It’s going to be messy, but self-regulating communities are already thriving online. On Reddit, each sub-reddit (sub-community) has it’s own set of rules and norms. The rules are enforced by moderators and the norms by the participants (via comments and down-votes); I imagine that the norms tend to be much more effective than the rules at shaping the culture of the sub-reddit. I would love to see a comparative analysis of sub-reddit rules and norms.

This ties into the “Exit vs Voice” conversation that’s been popular these days. Exit works well online because everyone is mobile - if users of a sub-reddit take issue with the moderators, they can start their own sub-reddit (See also: Homesteading the Noosphere). It’s more difficult in the real world as not everyone can exit.

One final example of laws vs norms before I call it a night:

Several European cities have removed all traffic signs from the roads. This has led to much safer streets as drivers became more aware of their surroundings and less likely to make legal yet unethical decisions while driving (which lead to accidents).