About this time last year I was working on a game called Nation Building. Inspired by The Origins of Political Order, the player would lead a civilization from humble origins as a band of hunter-gathers through tribe and city-state form to eventually form an empire. At least that was the vision. I documented my progress in blog posts here, but I eventually lost steam. 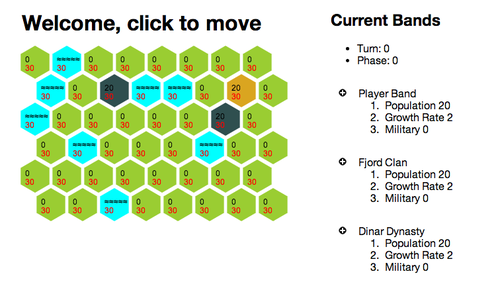 The first prototype was to involve moving you band of kinsmen across a map, growing until you could become a settled tribe; you can play the very unfinished version here - I spent more time working on the logic engine than honing the gameplay. Ultimately I struggled to balance interesting simulation of complex systems with fun gameplay.

This week, I’ve revisited the concept. Instead of investing serious time in building the full game (or even just the band stage of the game) - I’ve started by building out a few ‘toys’ - micro-prototypes to test a simple mechanic to see if it is fun or interesting.

The first experiment involved a simple terminal based game around manipulating a band’s birthrate. I have some basic systems in place to balance population with carrying capacity. I quickly scrapped the game together using Python and was able to explore several variations of non-linear systems. This didn’t yield a fun game, but rapidly let me play with a potential game mechanic. 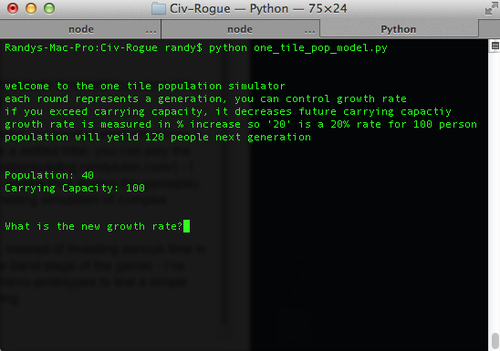 My next prototype has more of a focus on narrative. It starts off like a Choose-Your-Own-Adventure but will quickly develop more game-like qualities. I’m developing it with Angular and quickly built a branching decision engine. I’m still in the process of rounding out the story but will post it here when I have a more complete prototype.

I’m excited to be working on the Nation Building concept again and reinvigorated by the quick prototyping. Hopefully I’ll make it a bit further than last year!