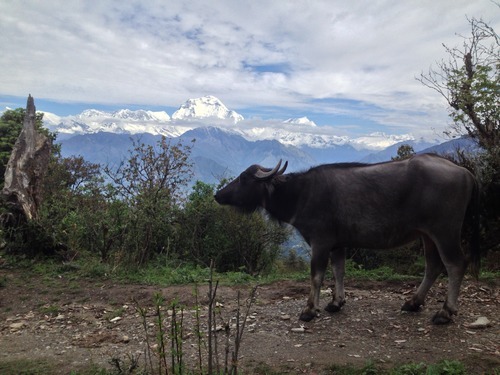 This past week I spent some time trekking in Nepal. The views, food, exercise, and experience were awesome.

On Saturday, I met Adam (my old roommate) at the Delhi Airport and we flew to Pokhara (via Kathmandu). Pokhara is a touristy town in the center of Nepal and the jumping off point for expeditions in the Annapurna mountain range. We found our hotel down a dusty lane. 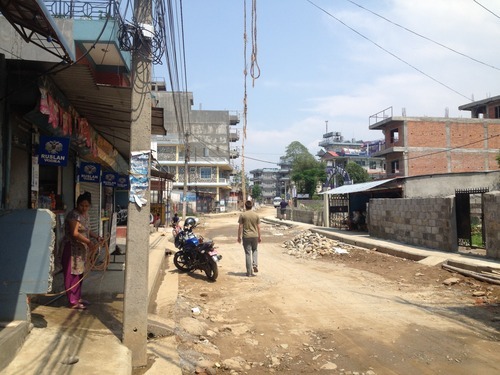 Hotel Middle Path was nice, clean, and had strong AC. Here’s the view from the roof. 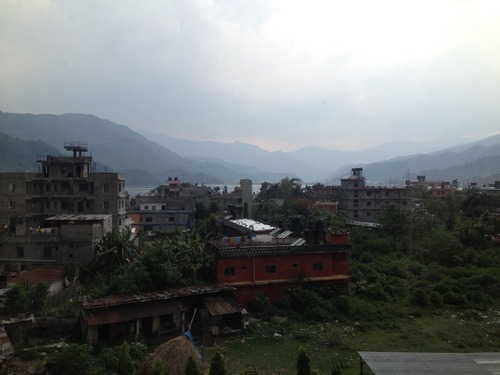 Trekking Day One - Nayapul to Ulleri

The next morning we rode to Nayapul - a small town thats a common starting point for trekkers. We packed light - a change of clothes, an extra layer, water and not much else. Our goal was to make it to Poon Hill - know for amazing views of the Himalayas - in two days. Most tours take three days to make it there.

Our hike started off well. It was a bit hot but our spirits were high and the scenery was beautiful. Our starting elevation was 1070m (3510ft). 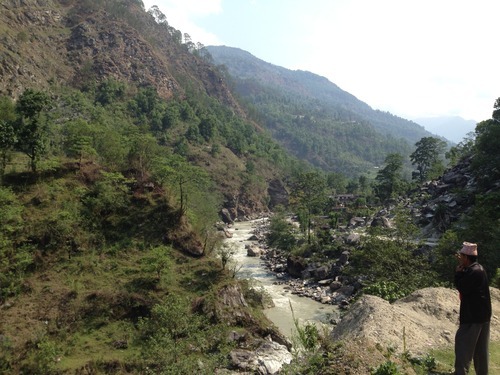 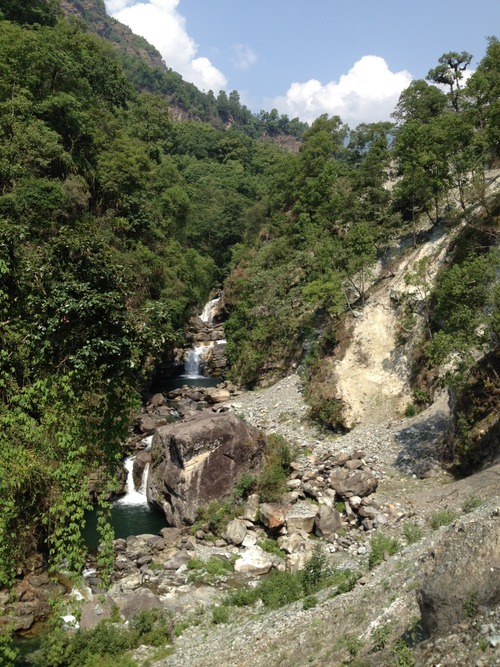 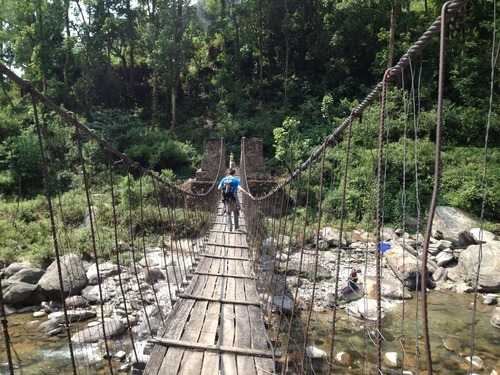 We passed yak and donkeys as we climbed. We had left the main road at Nayapula and donkeys seemed like the main way to transport goods up to the villages. 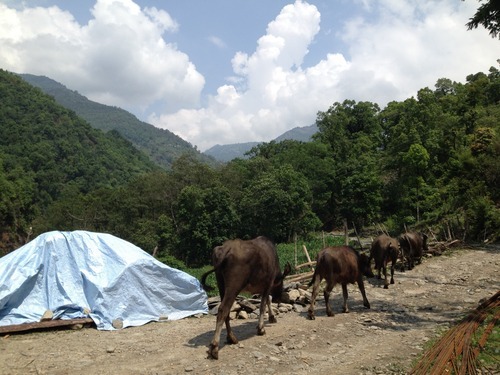 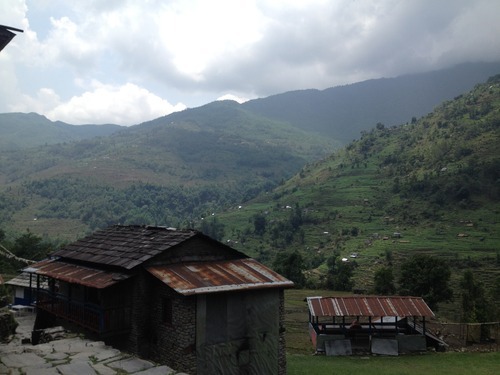 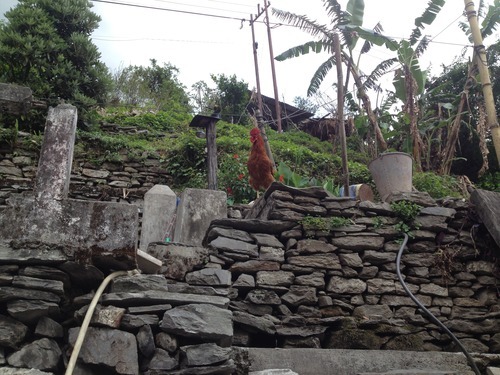 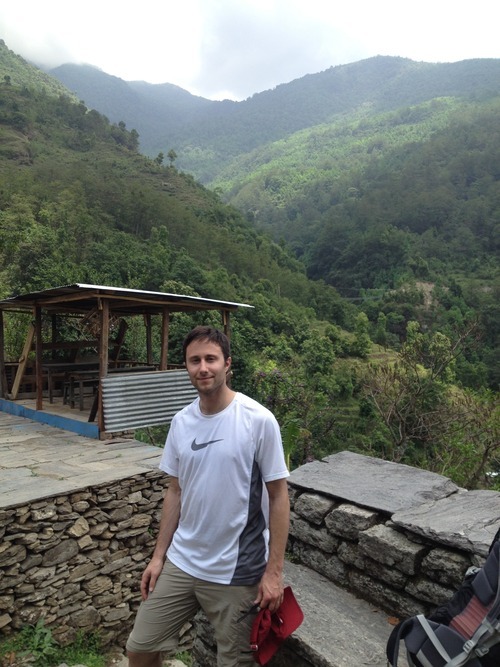 By early afternoon, after an exhausting climb, we reached the village of Ulleri at 2010m (6594ft). We stayed at a nice tea house named Meera / Mira. The villages around the Annapurna circuit have tons of tea houses / guest houses for tourists. They accommodations are often spartan but we always found nice clean-ish rooms and western toilets.

The tea houses all have attached restaurants and menus and prices for food and lodging is fixed across the region (prices go up the higher in elevation you go). Luckily the menu is very diverse and we didn’t grow tired of it by the end of the trek. We had the traditional Nepali dish of Dal Bhat - rice, lentil soup, and steamed veggies almost every day and it was always delicious and hearty. Life on the trail was inexpensive. We probably spent under $15 each per day - including housing.

We woke up early on the second day to try to beat the heat. The temperature dropped as we climbed and we were pretty comfortable. We weren’t too sore from the previous day but knew that there was serious elevation ahead of us.

As we began our climb, we saw glimpses of the Himalayan peaks. For the most part though, we followed a river bed and were surrounded by lush vegetation. 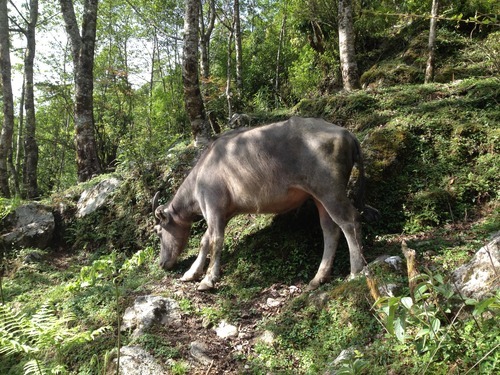 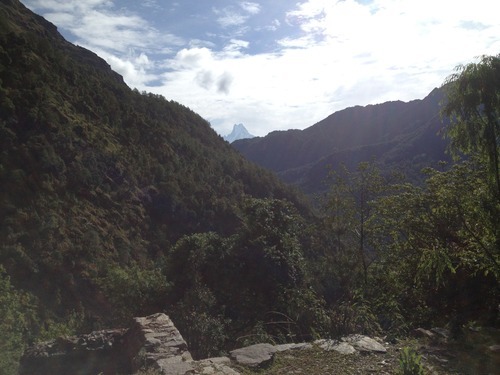 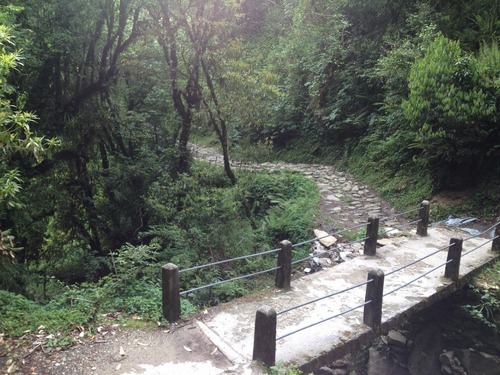 We made great time and reached Ghorepani - our target - before noon. The village sits at 2870m (9416ft) and we felt the altitude a bit. We were amazed at the good time we made. For the second day in a row, we found the travel time estimates conservative - and we’re not even in great shape. 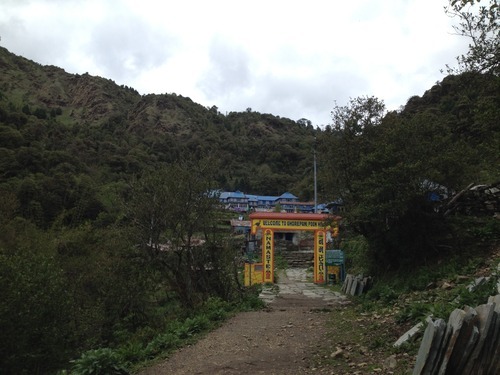 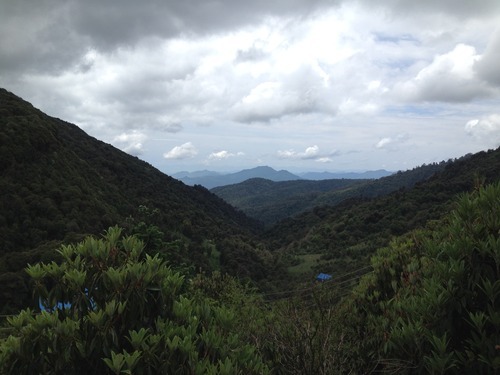 Ghorepani is a ~45 min hike from the top of Poon Hill. We were going to stay overnight to see the view at sunrise - something that had been highly recommended. With a bit of time on our hands, and well rested after lunch, we decided to make an additional climb of Poon Hill that afternoon.

As we climbed we got some good looks at the massive Himalayan peaks which surrounded us. Several of them were over 8,000m (26,000ft). 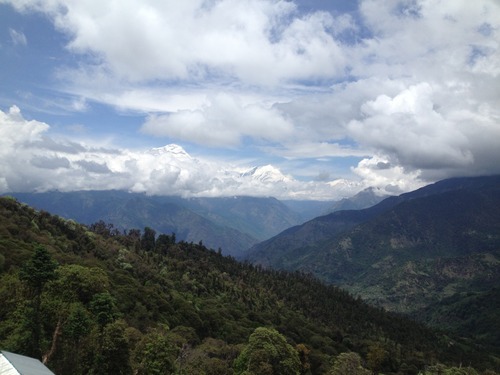 The climb up Poon Hill was a bit exhausting after our morning’s trek, and we were definitely feeling the altitude. We reached 3200m (10498ft), an additional 330 meters above Ghorepani. Just as we got to the top, the hill became encircled by clouds. After a few fleeting glimpses of the snowy peaks, we went back to our tea house. For the next few hours we were treated to brief views of the mountain tops. 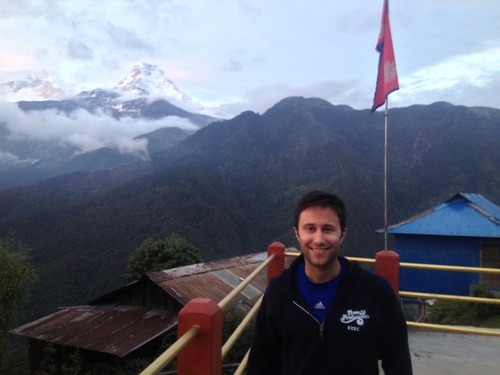 It was especially gorgeous at sunset. Here is a brief video I shot:

We then went to bed early, with plans to wake up at 4:30am and climb Poon Hill once more.

Next: Days Three and Four