Update: I’ve launched the game at Plotypus.com and am taking orders for a limited time.

Plotypus, the collaborative storytelling card game, is almost ready for launch. I’m doing one final design tweak and then I’ll be sharing the files online. For updates, please subscribe to the mailing list.

This post is about the Plotypus developent process, from origin to today. 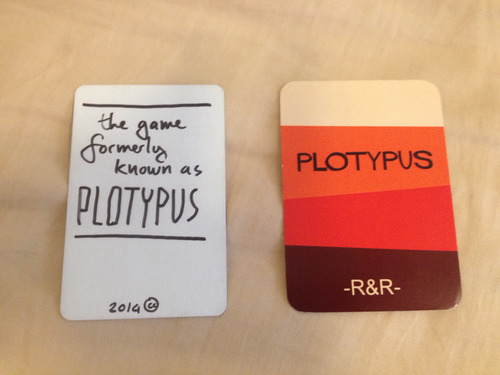 I started working on Plotypus last December with the goal of making an collaborative storytelling game that generated great plots. I enlisted the help of a designer friend - who wants to remain anonymous - to help with the development.

The initial story arc was a mashup of Hero With a Thousand Faces and Save the Cat; we were also influenced by Story. As we created the content for the decks, we often turned to TV Tropes for inspiration.

Over a couple days, we created a prototype using blank playing cards and Sharpie. This method worked extremely well as it allowed us to quickly generate tons of content and go through rapid playtests with each other to see what worked. At this point the game had roughly 80% of the elements as the final version.

I wasn’t sure what to call the game and as we were brainstorming options, I threw out ‘Plotypus’ as a joke. I immediately said that it shouldn’t be the name but we decided to keep it as a temporary codename for the project. Over time, the name grew on me and we were unable to generate a better option.

With our first prototype in hand, we playtested the game with roommates. The first test went very well. We confirmed that the game was fun and that it could generate a solid story. We also learned a lot about the player rules and norms that we’d need to keep the story on track.

Just after New Year’s I took a trip to the east coast. I brought the game with me and went through several more playtests with friends and family. In between the tests I added new villains and experimented with different card types. These tests were also big successes, gameplay was fun and yielded decent plots.

As playtests continued, we sought to refine the rules and cards. As in most creative endeavors, the trick was figuring out what to remove rather than one to add. Some ideas that we toyed with but kept out of the current game include:

One of the biggest challenges was negotiating the tension between enabling player freedom in storytelling and providing guardrails in case the player needed help. We decided to have strict, static plot cards to give the story a backbone but to give the players flexibility as to how to navigate between plot points. Another way we enabled constrained creativity was by providing settings and character cards but letting the players choose which ones to include.

Using blank cards and Sharpie allowed us to quickly tweak the deck between playtests. This let us get novel feedback each time through and easily experiment with new ideas.

Some of the refinements that arose in this period included:

One of the biggest challenges was honing the storybook deck. There are many permutations of the epic story arc. Our goal was to keep it the deck concise but clear. We wanted to use the least number of plot cards that still yield stories that adhere to the classic arc.

I started with an analytical approach. I used a cheat sheet from Save the Cat to estimate the amount of time dedicated to each section of the narrative. 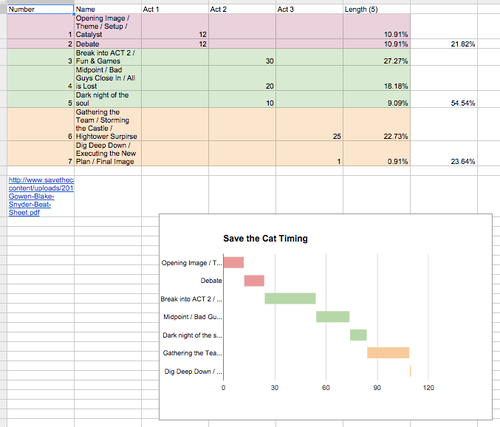 Next I remixed the Save the Cat plot points with Monomyth plot points and created several different storybook options of varying length. ultimately we decided to use the medium length option. The longer and shorter options might return in later releases. 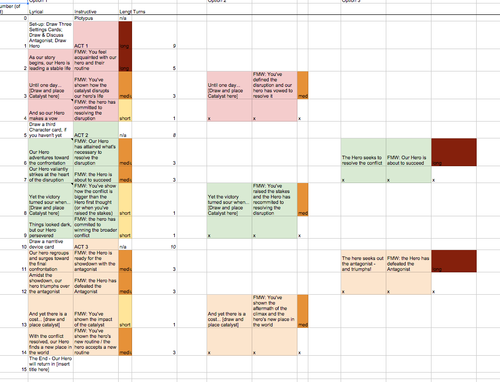 We kept playtesting the game, with friends as well as Sandbox - an open mic night for game designers. I carried Plotypus with me on various trips and played it with diverse groups of friends.

I continued to receive positive feedback and kept tweaking the game from what I observed. On the plus side, everyone seemed capable of jumping in and having fun and cogent stories emerged. On the negative side, the game didn’t scale well to large groups that weren’t giving their undivided attention.

One trend I noticed was that our games continually failed the Bechdel Test (Is there a scene with two women where they talk about something other than a guy?). I viewed this as a major problem as I wanted our game to produce stories that include interesting, complex female characters.

I suspected that the failure was because most of are character cards has male or gender neutral images. We changed the character cards to become two-sided male / female. This has completely solved the problem and every playtest since has included awesome female characters. 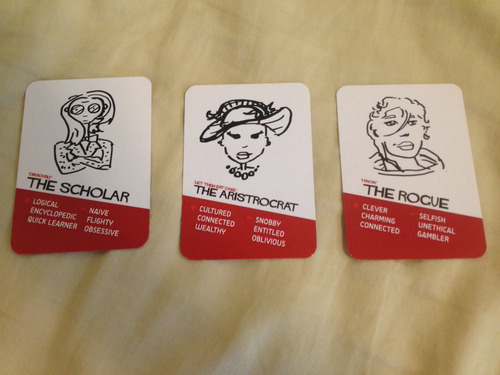 After much playtesting and refinement, we cracked open Illustrator and created a digital, printable version of the game. To keep things simple, we used the original line art from the Sharpie based prototypes. We also used somewhat minimalist design. We drew upon Saul Bass posters for inspiration.

After some research, I decided to optimize the formatting for Print & Play Productions. They allow for easy prototyping and distribution of board and card games. I found it pretty simple to format our cards to for their system and I’d never previously used Illustrator. 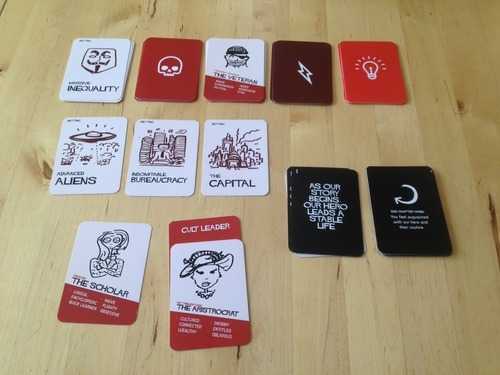 I’ve now gone through two rounds of test printing, playing with different color / fonts schemes. I’m very happy with how it turned out and will be posting the files soon.

After a few last design tweaks, I’ll be posting the files online for anyone to print and play. I’ll also probably do a bulk order for friend interested in buying a copy (at cost). Check this blog or subscribe to the mailing list to stay up to date.

After that, I’ll be eagerly awaiting feedback from everyone playing the game. I’m especially keen to learn from games in which I’m not present to explain the rules. Please let me know how it goes!

Based on the initial response, I will tweak the game further and post updated versions. Down the road I might:

It’s a been a blast so far and I’m excited to see what comes next!