Update: we’ve released a facilitator guide and all assets under a CC-BY license, check it out!

Over the past two weeks we’ve run a game about the Future of Money at Mozilla’s conference MozFest. The game was sponsored by Grant for the Web and I co-designed it with Mike Masnick and Leigh Beadon of Techdirt / Copia. The sessions went smoothly and players seemed to have a great time!

This post will give an overview of the game and provide some insight into the design choices we made. 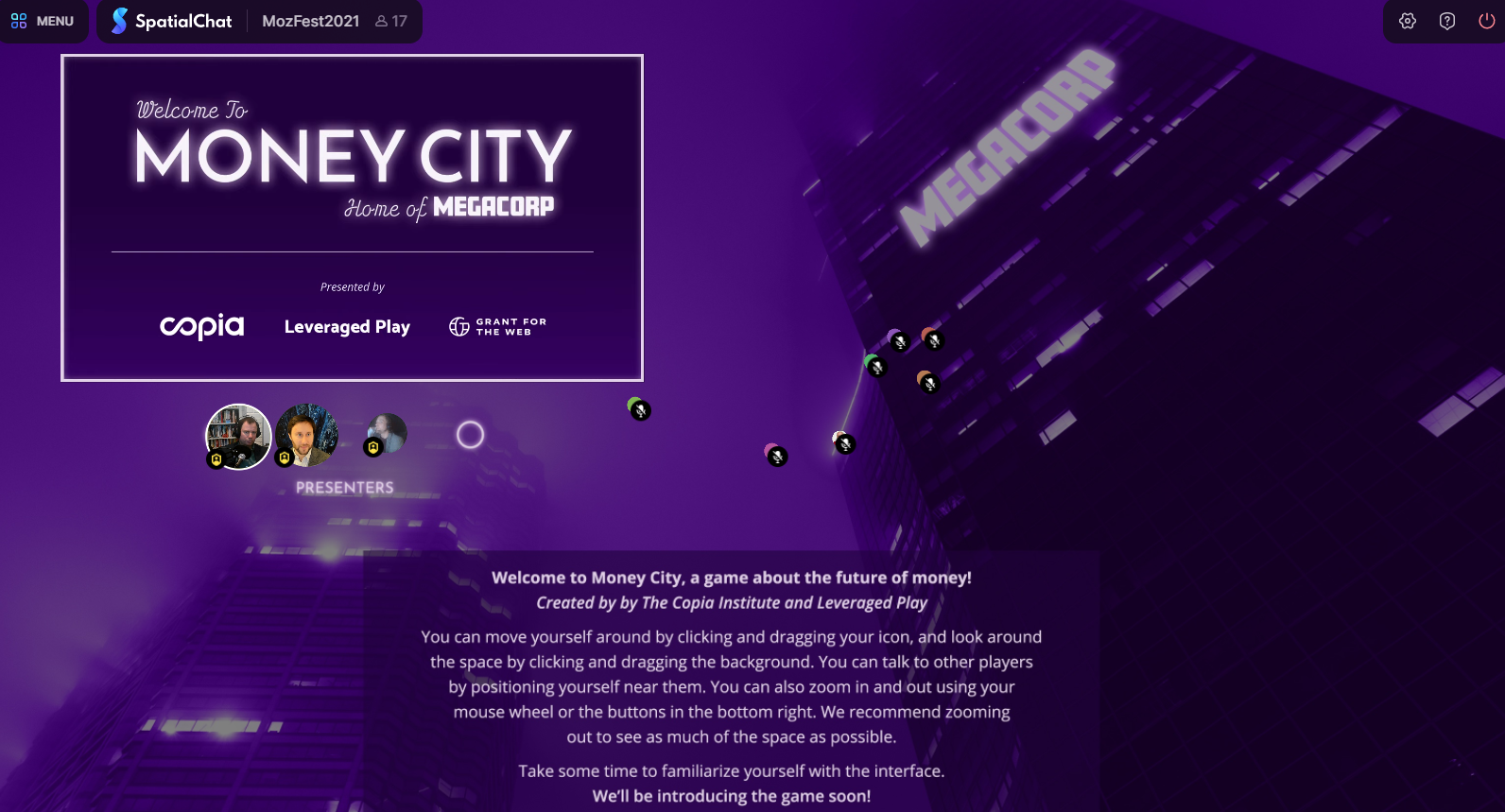 This game had a handful of design constraints with interesting tensions that pushed us to refine and remix some of our previous designs and to create new mechanics to support the overall experience. The constraints included:

The biggest tension we wrestled with was making the game fun while still engaging the themes of money and monetization. For a different audience, we could have a created a brainstorming foresight game, perhaps along the lines of Positive AI Economic Futures; for this audience, the approach would be too dry and potentially less approachable for non-experts.

Another barrier was that the topic didn’t have a natural game system embedded within it. Over the last few years we’ve run games about elections and they’ve been super easy to start designing – elections are already games of a sort with clear points and win conditions.

After batting around a bunch of ideas, we settled on a game set in a cyberpunk dystopia and have players engage with the future of money as they work to unseat a fictional mega-corporation that has monopoly control of most aspects of life and work. This turned out to be a great framing that let us craft a playful experience for the participants while still being focused on the topics we cared about. 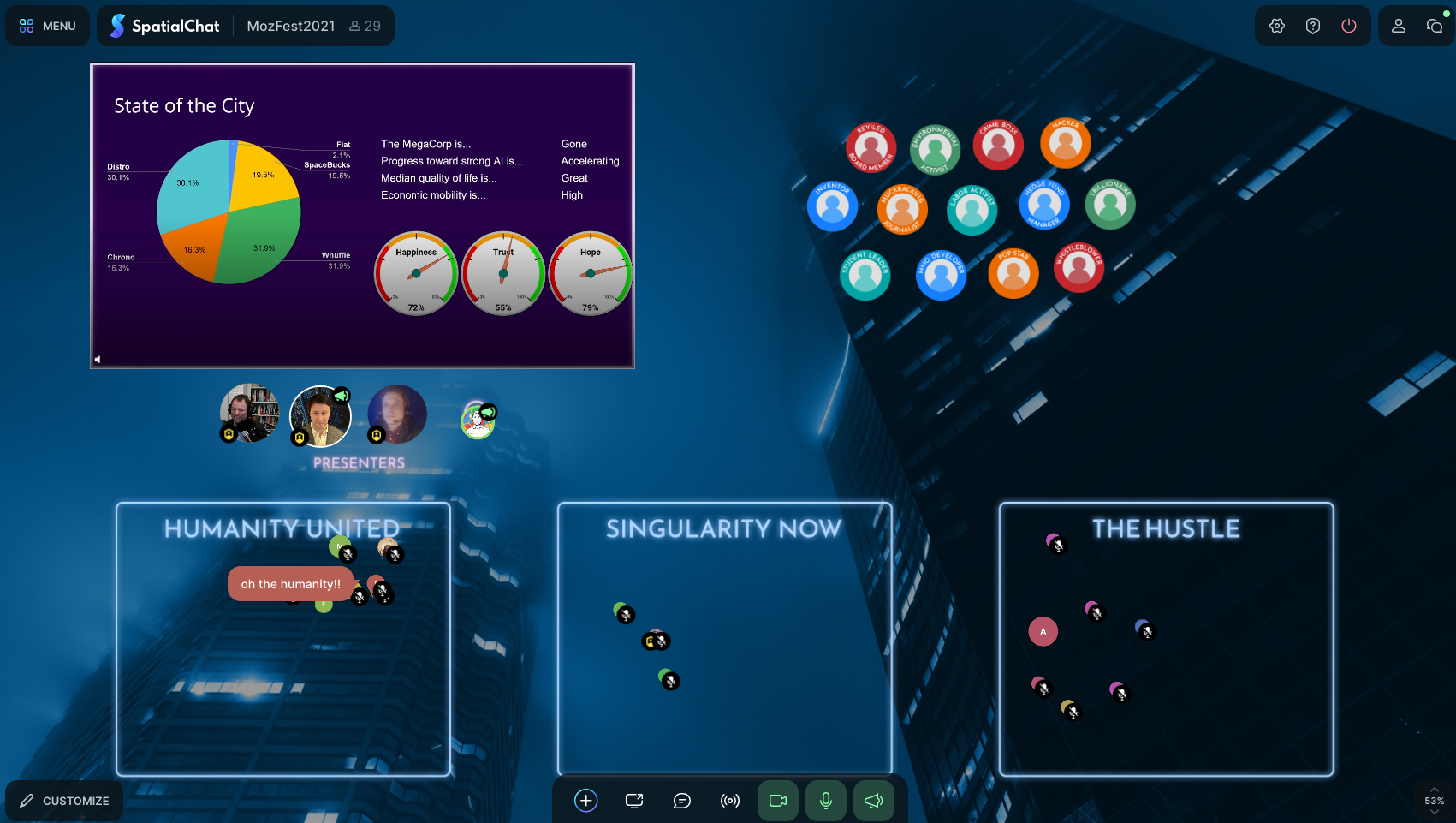 The game is set in Money City in an alternate timeline where MegaCorp controls much of the economy and government has mostly faded away. Players take on the role of three key factions that are working to gain autonomy from MegaCorp and advance their own visions for the future of the city.

The three player factions are:

Beyond the factions there were a variety of key influencers in the city that would come to the players with offers and whom the players could ask for assistance. These included hackers, pop-stars, trillionaires, whistleblowers, and more.

We also included six different currencies in the world to prime the players to engage with the future of money and give them affordances for manipulating the economy of Money City. MegaScrip, controlled by MegaCorp was most dominant at the start of the game but some of the other currencies that dealt with reputation, wealth redistribution, and time banking and were available for players to leverage and manipulate.

The game took place over three rounds that span a broad swath of time. In the first round, MegaCorp has near total dominance of Money City and the players need to try to undermine it and advance their own agenda. In the second round, MegaCorp has fallen and the players are scrambling to take advantage of the chaos that fills the city in its absence. In the third round, things are settling down and players are trying to get the city to embrace their vision for the future.

Over the course of the game, players engaged in a variety of activities but one main one was crafting interventions for their faction. In each of the first two rounds, each faction had to develop two main ways their faction was going to influence the city and further their aims. See our example intervention below: 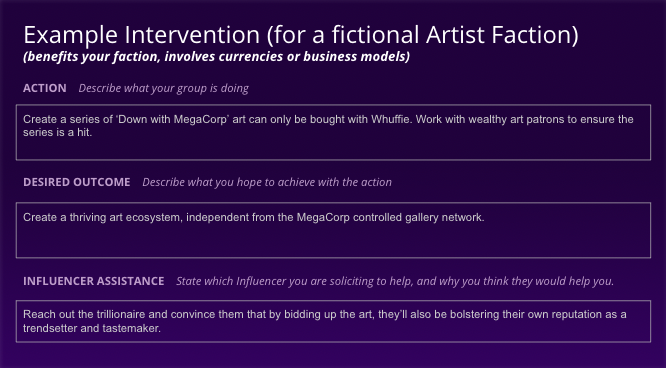 Interventions would be collaboratively authored by the players in breakout groups and then shared to the entire session at the end of each round. Then, the game facilitators would evaluate the interventions and update the state of the game for the following round.

Another player activity was making decisions related to the city’s influencers who would come to them with dilemmas and opportunities. For example, the shadowy Hacker Collective gained access to MegaCorp’s systems and asked Humanity United whether they should take down the MegaScrip processing network or instead find and leak secret reports on worker abuses.

In the final round of the game, players drafted plans and speeches to promote their factions vision for the future of the city. Then players and the non-player influencers all voted on which vision they wanted to see win. 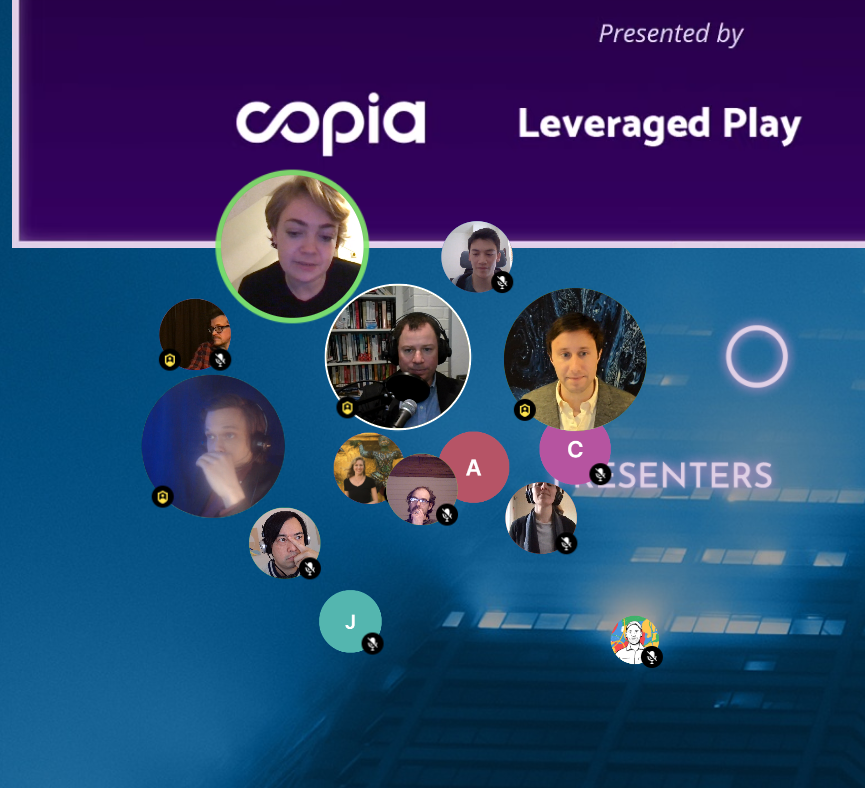 We ran the game on Spatial Chat – an online event space where players appear in small circles that can move around the room and you can hear people who are close to you but audio fades with distance.

This was our first time designing on Spatial and we were able to take advantage of several its affordances. A few times throughout the event we had players vote by moving their avatars to different parts of the space. It also allowed for us to have fluid breakout groups within factions for when the players wanted to split up and work on different interventions in parallel.

We used the customizable background to carve out spaces for each team as well as for us as presenters. Most of the game info was conveyed via slides and we ended up embedding a livestream of our slide deck in each of the breakout rooms so we could keep all game content in sync. We also pinned different images throughout the game to provide scaffolding and instructions for the players.

A few miscellaneous bits on some of our design decisions.

We used a variety of techniques to maintain focus on the themes of money and monetization:

Much of the game involved players brainstorming and pitching interventions. We did a few things to set them up for success: 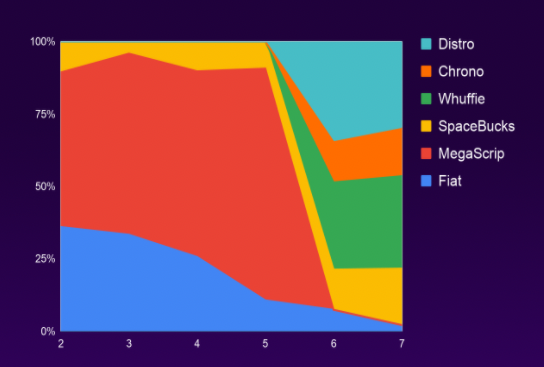 The game state was relatively light for this game, compared to some of our other designs.

We tracked the relative market share / transaction volume of the different currencies over the course of the game which was driven by the facilitator interpretations of the player interventions. That way players had a quick feedback loop for how their actions were affecting the world. 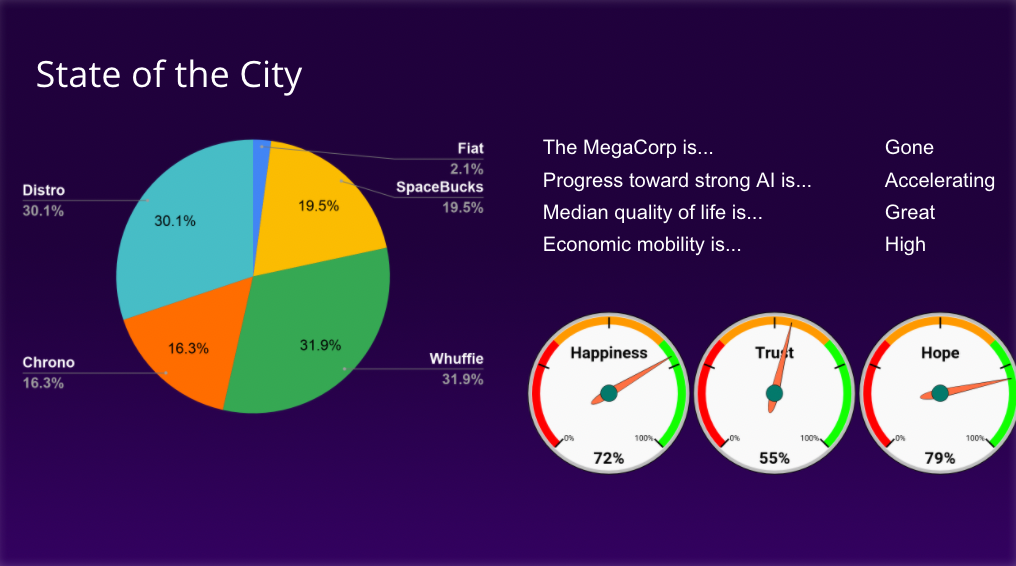 We also had gauges that tracked city residents’ sentiment around happiness, trust, and hope. And we had qualitative tracking of the state of the MegaCorp and also factions’ goals which we would update each round.

These different elements of state were a good balance of providing feedback to the players and remaining manageable for us to quickly update during the short post-round intermissions.

We had a lot of fun running the sessions! We’re going to collect all the player actions and stories into a central, shareable document. We’ll also create a guide to running the game, complete with all the materials so that anyone can run it without us. Depending on time and interest, we may run another session or two of the game so keep an eye out if you’re interested in playing.